For all parties involved in the act of publishing – the author, the journal editor(s), the peer reviewer and the publisher – it is necessary to agree upon standards of expected ethical behaviour. The ethics statements for the gis.Science are based on the Committee on Publication Ethics (COPE) Core Practices.

Duties of the Editors-in-Chief

Editors-in-Chief evaluate submitted manuscripts solely based on their academic merit (importance, originality, study’s validity, clarity), its relevance to the journal’s scope and regardless of race, gender, sexual orientation, religious belief, ethnic origin, citizenship, or political philosophy of the authors. Decisions to edit and publish are not determined by the policies of governments or any other agencies outside of the journal itself. The Editors-in-Chief have full authority over the entire editorial content of the journal and the timing of publication of that content.

The Editors-in-Chief and editorial staff will not disclose any information about a submitted manuscript to anyone other than the corresponding author, reviewers, potential reviewers, other editorial advisers, and the publisher, as appropriate.

The Editors-in-Chief, and editorial staff will not use unpublished information disclosed in a submitted manuscript for their own research purposes without the authors’ explicit written consent. Editors and reviewers will recuse themselves from considering manuscripts in which they have conflicts of interest resulting from competitive, collaborative, or other relationships/connections with any of the authors, companies or institutions connected to the papers; instead, they will ask another member of the editorial board to handle the manuscript.

The Editors-in-Chief of the journal ensure that all submitted manuscripts being considered for publication undergo peer-review by at least two reviewers who are expert in the field. The Editors-in-Chief are responsible for deciding which of the manuscripts submitted to the journal will be published based on the validation of the work in question, its importance to researchers and readers, the reviewers’ comments, and such legal requirements as are currently in force regarding libel, copyright infringement and plagiarism. The Editors-in-Chief may confer with other editors or reviewers in making this decision.

Peer review assists the Editors-in-Chief in making editorial decisions and, through the editorial communication with the authors, may assist in improving their manuscript. Peer review is an essential component of formal scholarly communication and lies at the heart of scientific endeavour. The gis.Science shares the view of many in the academic community that all scholars who wish to contribute to the scientific process have an obligation to do a fair share of reviewing.

Any invited referee who feels unqualified to review the research reported in a manuscript or knows that its timely review will be impossible should immediately notify the Editors-in-Chief so that alternative reviewers can be contacted.

Any manuscripts received for review are confidential documents and are treated as such; they must not be shown to or discussed with others except if authorized by the Editors-in-Chief (who would only do so under exceptional and specific circumstances). This applies also to invited reviewers who decline the review invitation.

Reviews should be conducted objectively and observations formulated clearly with supporting arguments so that authors can use them for improving the manuscript. Personal criticism of the authors is inacceptable.

Reviewers should identify relevant published work that has not been cited by the authors. Any statement that an observation, derivation, or argument had been previously reported should be accompanied by the relevant citation. A reviewer should also call to the Editor's attention any substantial similarity or overlap between the manuscript under consideration and any other manuscript (published or unpublished) of which they have personal knowledge.

Disclosure and conflict of interest

Privileged information or ideas obtained through peer review must be kept confidential and not used for personal advantage. This applies also to invited reviewers who decline the review invitation. Reviewers should not consider evaluating manuscripts in which they have conflicts of interest resulting from competitive, collaborative, or other relationships or connections with any of the authors, companies, or institutions connected to the submission.

Authors reporting results of original research should present an accurate account of the conducted work followed by an objective discussion of its significance. The manuscript should contain sufficient detail and references to permit others to replicate the work. Fraudulent or knowingly inaccurate statements constitute unethical behaviour and are unacceptable.

Authors should ensure that they have written and submit only entirely original works, and if they have used the work and/or words of others, that this has been appropriately cited. Publications that have been influential in determining the nature of the work reported in the manuscript should also be cited. Plagiarism takes many forms, from "passing off" another's paper as the author's own, to copying or paraphrasing substantial parts of another's paper (without attribution), to claiming results from research conducted by others. Plagiarism in all its forms constitutes unethical publishing behaviour and is unacceptable.

Papers describing essentially the same research should not be published in more than one journal or primary publication. Hence, authors should not submit for consideration a manuscript that has already been published in another journal. Submission of a manuscript concurrently to more than one journal is unethical publishing behaviour and unacceptable.

Proper acknowledgment of the work of others must always be given. Authors should ensure that they have properly acknowledged the work of others, and should also cite publications that have been influential in determining the nature of the reported work. Information obtained privately (from conversation, correspondence or discussion with third parties) must not be used or reported without explicit, written permission from the source. Authors should not use information obtained in the course of providing confidential services, such as refereeing manuscripts or grant applications, unless they have obtained the explicit written permission of the author(s) of the work involved in these services.

Hazards and human or animal subjects

If the work involves chemicals, procedures or equipment that have any unusual hazards inherent in their use, the authors must clearly identify these in the manuscript. If the work involves the use of animals or human participants, the authors should ensure that all procedures were performed in compliance with relevant laws and institutional guidelines and that the appropriate institutional committee(s) has approved them; the manuscript should contain a statement to this effect. Authors should also include a statement in the manuscript that informed consent was obtained for experimentation with human participants. The privacy rights of human participants must always be observed.

All authors should disclose in their manuscript any financial or other substantive conflict of interest that might be construed to influence the results or their interpretation in the manuscript. All sources of financial support for the project should be disclosed.

Authors are obliged to participate in the peer review process and cooperate fully by responding promptly to editors’ requests for clarifications, raw data, proof of ethics approval and copyright permissions. In the case of a first decision of "revisions necessary", authors should respond to the reviewers’ comments systematically, point by point, and in a timely manner, revising and re-submitting their manuscript to the journal together with the corresponding rebuttal by the deadline given.

When authors discover significant errors or inaccuracies in their own published work, it is their obligation to promptly notify the journal’s editors or publisher and cooperate with them to either correct the paper in the form of an erratum or to retract the paper. If the editors or publisher learns from a third party that a published work contains a significant error or inaccuracy, then it is the authors’ obligation to promptly correct or retract the paper or provide evidence to the journal editors of the correctness of the paper. The COPE retraction guidelines apply https://publicationethics.org/files/retraction%20guidelines_0.pdf.

Duties of the Publisher

In cases of alleged or proven scientific misconduct, fraudulent publication or plagiarism the publisher, in close collaboration with the Editors, will take all appropriate measures to clarify the situation and to amend the article in question. This includes the prompt publication of an erratum or, in the most severe cases, the complete retraction of the affected work. The publisher, together with the editors, shall take reasonable steps to identify and prevent the publication of papers where research misconduct has occurred, and under no circumstances encourage such misconduct or knowingly allow such misconduct to take place.

The publisher is committed to the permanent availability and preservation of scholarly research and ensures accessibility by partnering with organizations and maintaining our own archive. The Wichmann Verlag, VDE VERLAG GMBH has an archiving policy: Deutsche Nationalbibliothek.

We hereby point out that the GIS SCIENCE JOURNAL (www.gisscience.net) appears illegally under the name of gis.Science. The journal provides information on the website that is only valid for the gis.Science: the ISSN and a link to Scopus. Furthermore, there are some gis.Science contributions from earlier years published illegally. 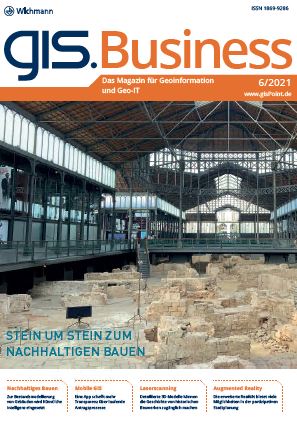 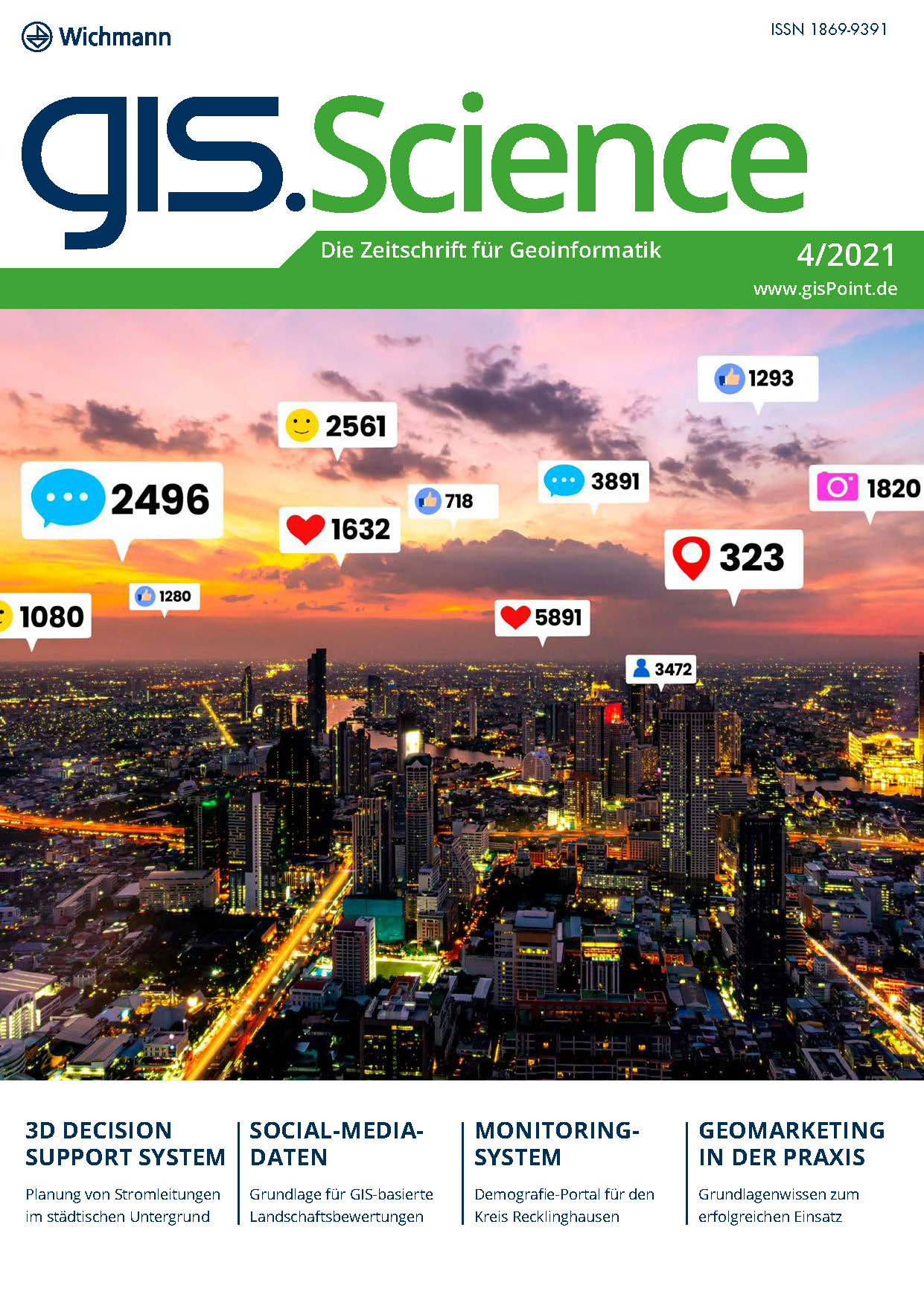 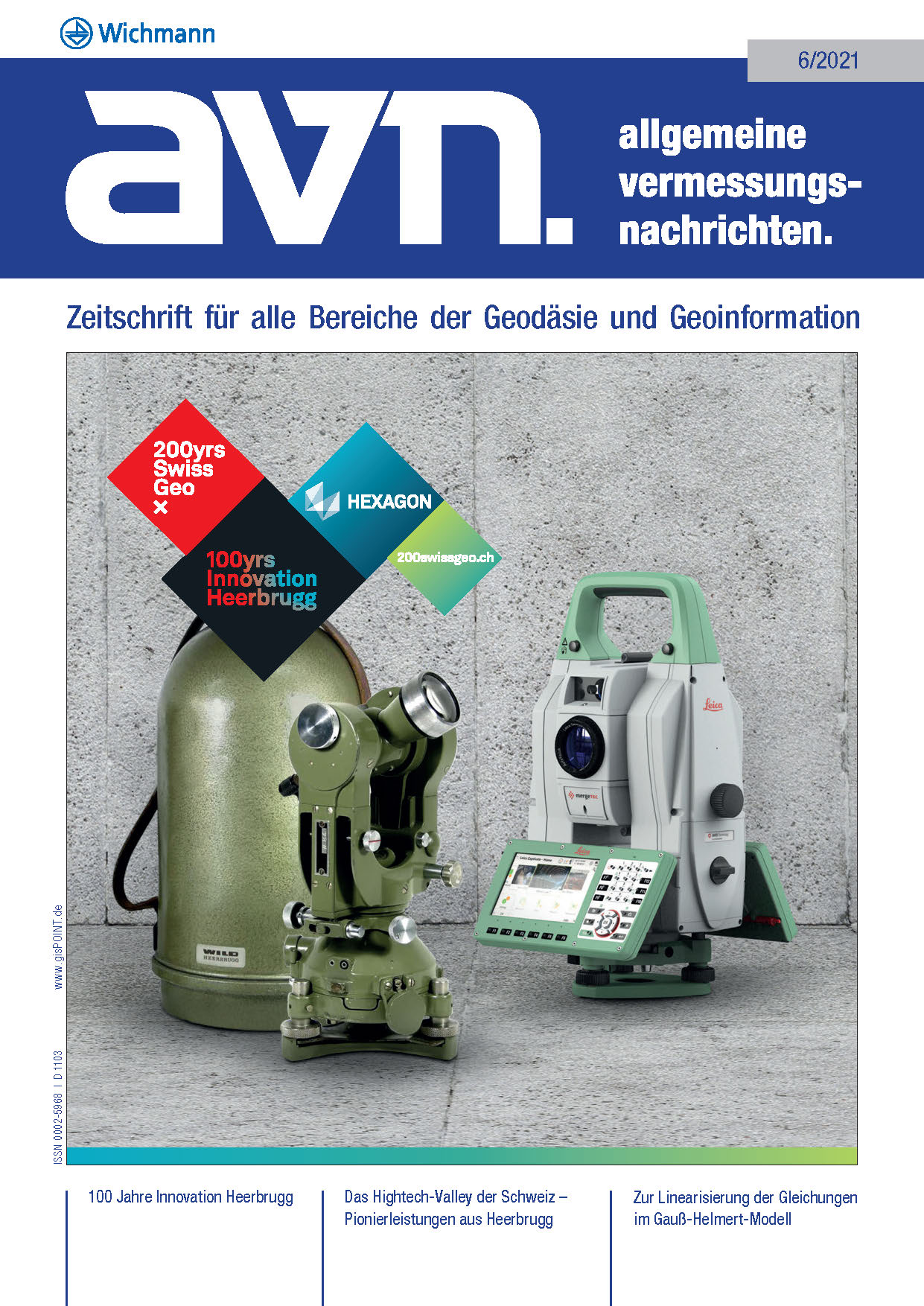